Mgr Charles Pope recently turned his deft blogging hand to a subject close to our heart. Pulling up Roots from Reality – A Review of a Cogent Analysis of the Post-Cartesian West.

Like Fr Edward Holloway and others he acknowledges that a key moment in the rise of relativism was René Descartes’ dualistic attempt to shore up the foundations of knowledge. They both also acknowledge that this was in the context of the rising challenge against the idea of “the nature of something” from the school of Nominalism. But, as some of the comments on Pope’s post highlight, another important part of Descartes’ context was the challenge of the new science to the scholasticism in which he was trained. More specifically, Pope has ignored the challenge to Aristotelian “natures” from experimental observation as highlighted by empiricists from Francis Bacon onwards. Galileo’s mathematics was becoming the language for describing the patterns we find in the physical world. As is widely acknowledged today: 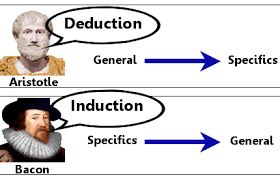 Descartes proposed, from the very beginning of his first (unfinished) treatise Rules for the Direction of the Mind in 1628 refounding “deduction”, and mathematics, by “intuited” (later “innate”, Meditations, 7:64–5, 72–3) ideas rather than scholasticism’s, by now discredited, “abstracted concepts”. A key spur to Descartes’ actual writing was a critical floor speech he gave at a 1620s Baconian talk, in the presence of his great supporter Cardinal Bérulle.

Culturally speaking, Bacon won! His points were, and have continued to be, fuel to the nominalistic denial of ‘natures’. Galileo’s “Laws of Nature” extrinsic to natural things became all the rage.

But the influential neo-Aristotelean Nancy Cartwright (e.g. The Dappled World, 1999, Chapter 4, Aristotelian Natures and Modern Experimental Method) has mitigated this development, in a manner akin to Holloway. She notes how the Baconian-Nominalistic spin upon the “New Science” was too extreme. Hers is a partial return to “natures” which found provisional, descriptive, “laws of nature”.

Yet the key point for Catholic thinkers to acknowledge is that the philosophy of science from Bacon right through to modernity has shown that the success of modern experimental observation does challenge Aristotelian-Scholastic “natures”. Natures it turns out are more visible and flexible, and their effects more complex and mathematical than Aristotle acknowledged (Cartwright, p.81f). The type of causation which they manifest is not only concerned with their own “Formal” fulfilment - for example the full oak tree concerning the acorn. Rather the acorn as it grows is defined in relation to its overall environment. “Final causation” is not radically distinct from “efficient causation”. A thing’s end and engagement with the environment is intrinsically relative to that environment. 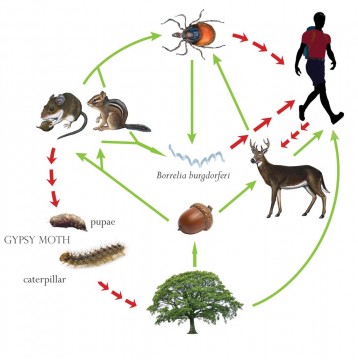 Above: An aspect of the acorn’s ecosystem. Its developmental nature is to tend towards specific contributions to the environment, centred around, but not exhausted by, its own growth towards being a fuller member of the oak tree family.

Holloway argued that when the objects of are experience are “plumbed to [their] depths by empirical science the last bastion of Greek ... philosophy was and is under siege" (Perspectives in Philosophy, Vol. III, Noumenon and Phenomenon. Rethinking the Greeks in the Age of Science, 1996, p.10. Yet from Descartes to Gilson’s “From Aristotle to Darwin and Back Again” Catholic philosophy has reacted too strongly against the challenge, and unwittingly given freer rein to the empiricist and nominalist deconstruction of the concept of “the nature of something”. The proper solution is the Cartwright-Holloway middle way, but it has been too long in coming.

Here is a bit more of how Holloway tries to develop Scholastic hylomorphism in the light of modern science. [Perspectives in Philosophy Vol. II, Rethinking the Existential, Ch. 4, p.45]:

“In the book Catholicism: A New Synthesis, one has used the expression "relative form", and also for greater clarity of grasp, the expression "elastic form". The sense is this: - in the philosophy of Aristotle and the heirs to his inheritance, the form, the recognition of the thing-as-the-sort, is static, rounded, and totally clean cut. It is very neat, but untrue to nature, exact observation, and of course modern science. It is almost incompatible with any coherent theory of the evolution of species, i.e. of sorts. In the theory we are offering, since knowledge is by intuition and perception, not by abstraction of only part of the singular real, this ultimate universalism of the nature as sort or species, is said to be a singular real and also a concept defined within a distinct limit of formal variability, both as real, and also as concept. In the Thomist synthesis the "nature" as static and formal possesses no intrinsic principle of formal relativity, or "elasticity" in very concept at all. An oak tree and an acorn are equally and formally one in notion. Every distinction of growth and development is accidental, a further incidental accretion to the static perfection of oak-tree nature. The same is true of horse and horsiness; the early foetus horse is as much and as perfectly horse in essence, in nature, as is the mature winner of the Grand National. In the system we are proposing, this will not be so. The very concept of oak-tree is defined both as an entity, and as the concept of an entity within a variability of fact, and also of environmental law within limits. These limits are set by the cosmos itself, of which this entity as a "nature" is a function. For example: first, the concept of the oak-tree involves a process, an intrinsic and entitative process of development, from early acorn to majestic oak. This process for us is not accidental, it is a real increase in the perfection of the intelligibility within which the formal notion of "oak" is defined. We dispense with the concept of the accidental and incidental, and place both within the variability of the intrinsic notion of the essence.”