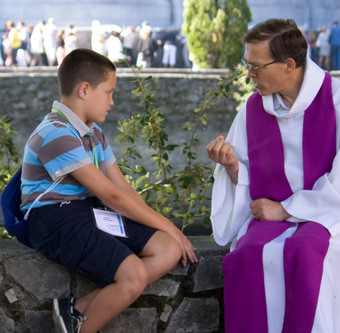 A vision realised? - An interview with Myles Dempsey

A Norfolk meadow and a big Catholic gathering: people are pouring out of a big tent, children are running about, everyone is starting to gather for a Rosary procession. In the centre of things, an elderly man is moving slowly and purposefully on an automated chair-bike. This is New Dawn in the Church, a vast gathering that takes place every year at Walsingham, and the man in the chair-bike is Myles Dempsey, effectively the founder of the event and still  keen to be at the heart of things. Many of those attending are the grandchildren of those who first came to what is now an established part of Catholic life in Britain.

The Rosary Procession winds its way down the Holy Mile, praying the Mysteries interspersed with Marian hymns:  ”I as I kneel before you” with its chorus of “Ave, Ave, Ave Maria” is a favourite.  Along with other pilgrims down the centuries, many of the walkers are barefoot. The crowd is large, so it all takes a long time. At the entrance to the ruined priory in the village, everyone cascades down in genuflection as a Monstrance is being held high, blessing all the pilgrims as they arrive. A long line of priests, headed by a couple of Bishops, walks in procession through the tall priory arch to begin the Mass.

Myles Dempsey is omnipresent at New Dawn, greeting everyone, trundling in his chair-bike across the meadow, transferring painfully from it to join guest speakers for lunch. The heart of New Dawn is a massive tent where the main daily Masses are held, along with morning and evening prayer, and a full programme of talks, the Rosary, and adoration of the Blessed Sacrament. Around the field, priests hear confessions - with long lines pf penitents – and in smaller tents talks and workshops are offered on a range of topics: the Holy Spirit, evangelisation,  discovering the lives of the saints, contemplative prayer.

Organisation of the whole event happens miles away from Walsingham, with a small team based at a former convent on the outskirts of Liverpool.

“It all began at Ars in France” Myles explained.  “I went there to take part in a big retreat/conference gathering, and I stopped at the statue that marks the place where St John Vianney, the famous Cure of Ars, spoke to the small child when he first arrived. You know the story of course – he asked the way to the village and the little boy pointed out the right direction, and the Cure told him “You have shown me the way to Ars and I will show you the way to Heaven’.  Praying there, I had a very strong message that came straight into my heart. It was about Walsingham. It was a deep, absolutely clear conviction that there had to be a great gathering in England and it had to be at Walsingham.”

“It was absurd, really – I had no resources for that sort of thing, there was no structure, and I didn’t know Walsingham well and certainly had no system for organising anything there. But…well…”

Myles was by that stage a busy family man, active in the Church, and deeply influenced by the Charismatic movement. He had arrived in England from Ireland years before, not planning to stay.

“My plan was to go to America – that was the goal. I only went to England as a staging-post. But I got a job, and then as things developed, America didn’t happen.

“I joined the Catholic Evidence Guild – it was very strong at that time, and we went to training sessions where we really learned about the Faith in its fullness, ready to teach it and answer all sorts of questions and challenges. The Guild trained people to give pubic talks – out in the street at well-known places where street-preachers used to go – and it was very organised. You couldn’t be accepted as a speaker until you were fully trained, and it was very structured. I am so grateful to the Guild – it formed the basis of so much for me and for so many others.”

Involvement with the charismatic movement  in the 1970s meant prayer-groups, meeting variously at St Patrick’s church in Soho and then later the southern suburbs of London. This culminated in the Prince of Peace Community – initially based at the Dempseys’ family home in the London suburbs and then established in its own premises.

Myles Dempsey tends to pepper his conversation with words and phrases popular with the charismatic movement, and has a startling way of assuming, with great confidence, that a great revival of the Church will take place in Britain.

Interestingly, he was saying repeatedly – back in the 1980s and 90s -  that the revival would be centred on Walsingham.  This was long before the present developments at the shrine and the consecration of England to Our Lady that is now in preparation. He is thus now unfazed by the fact that current expansion at the shrine, including its new status as a Basilica, and plans for its further development, appear to be bearing out his hopes over the decades.

He had, he says, a “prophetic word” from God back in 1973 and felt God saying “you will see the day when I will bring people tumbling into my Church”.  But he makes no claim about the charismatic movement as such, seeing it simply as part of God’s continuing plan.”

It does have to be said that the music at New Dawn – loud, jazzy, centred on deafening noise – is certainly not to everyone’s taste. Deep reverence at Mass is combined with “praise songs”, the words – often to unsingable tunes – displayed on massive interactive screens on either side of the sanctuary. Is this to everyone’s taste?   Myles is not easy to draw out on the subject. His own style and theology are rooted in a deeply traditional faith and practices: struggling with age and painful foot problems he  is routinely heard to  mutter “all for thee, Jesus” in the tradition of “offering up” suffering. The daily pattern of the small Prince of Peace community where he now lives is centred on Mass, the Divine Office, and the Rosary.

The New Dawn gathering looks set to be part of the new chapters opening up at Walsingham. Families seem to enjoy the mix of socialising – most bring tents and camp, sometimes cooking their own food, sometimes buying meals on-site – with devotion and talks. Many seem to find that the most valuable aspect is contact with people who share their values and their hopes for their children – a full youth programme requires its own separate field each year at Walsingham – and a sense of community and solidarity. Conversations are frank, and real problems are tackled:  poor RE in Catholic schools, grave worries about plans for sex education there, pressures on the young from social media, a longing for strong leadership on some of these issues from Bishops. At a time when many Catholic organisations are struggling to replace older members, New Dawn seems to continue to attract new families and to adapt to new needs and hopes.

The organisation of New Dawn is now internet-driven, with people booking via the website and paypal, and keeping up to date with Twitter etc.  The event’s popularity still seems chiefly to be spread through word of mouth and informal networks. It shares with other groups, such as Mothers’ Prayers and Mary’s Meals – both of which regularly end speakers to New Dawn – a genuine sense of connection with ordinary Catholics bypassing labels such as “traditionalist” or “liberal”.

Myles Dempsey’s own routine now no longer includes the programme of speaking engagements and travel that once hallmarked it. But settled in a favourite chair at St Emilies in Liverpool, he offers a mixture of enthusiasm and serenity as he ponders what the future holds: he remains convinced that God will keep his promises about a revival of the faith: “It’s in Our Lady’s hands”.