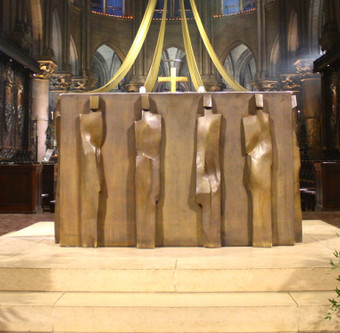 A welcome in Manhattan

A welcome in Manhattan

They had just fnished a “Baby Shower” party – the big sitting-room still had its there was more to come – a decorated announcement by the door welcomed a new resident, another pregnant girl. Meanwhile, there was warmth and laughter over evening snacks in the kitchen, lively talk and a relaxed atmosphere of friendship.

The Sisters at the Sacred Heart Convent in New York share their home with young mothers in need – girls who are pregnant and alone and who might otherwise be tempted to abort their children.

There is a sense of welcome as soon as the door is opened. And the house – home to an extraordinary mixture of contemplative prayer and bustling babycare – exudes an air of purposeful calm.

Leading the community at Sacred Heart is Sister Catherine Marie Ross, a Canadian – “My family were originally from Scotland” – who joined the Sisters of Life some ffteen years ago. 22 If religious life is about rules and “I’d taken a year out of university to work full-time for the pro-life cause” she recalls, “and some one put a newspaper cutting on my desk about the Sisters of Life. I went on a retreat with them, and felt I wanted to give my life’s work to the Church.

I met Cardinal O’Connor and he encouraged me to fnish college, and stay in touch and take things from there.” Cardinal John O’Connor, Archbishop of New York from 1984 to 2000 founded the Sisters of Life in 1991 as a response to the growing tragedy of abortion. As a brand- new and now thriving religious order, they have a specifc charism, centred on a sense of being called by the Holy Spirit to love the women and children they seek to serve. structures, it just won’t work. And – very importantly – it isn’t about saying ‘I want to do pro-life work’. It is frst of all to be a bride of Christ.”

The girls who fnd a refuge at Sacred Heart fnd that it is not only welcoming, but also ofers the opportunity for full refection and making long-term plans. Girls who are ofered a place here must either be in work or in some form of full-time study. Each has her own room, and there is a large common room – where the latest Baby Shower party had just fnished – plus a kitchen where they make their breakfasts and snacks, a full cooked meal being provided every evening. The theme of the house is “Holy Respite”. The young women remain for some six months after giving birth, during which time they can establish their future plans and be supported in fnding the way ahead. Many forge lasting friendships and return to the home for special feast-days and celebrations.

Sister Catherine Marie and her team seem to be a happy bunch – chats in the kitchen often broke into laughter, and an invitation to join the sisters in their own refectory for lunch revealed a community with a sense of unity and purpose. “There’s a need for the Holy Spirit to work. It’s all about love. If religious life is about rules and structures, it just won’t work. And – very importantly – it isn’t about saying ‘I want to do pro-life work’. It is frst of all to be a bride of Christ.” “And the presence of Christ gives you a sense of being loved. Our prayer is: ‘Lord, here I am . . . love me.’ You allow the Lord to love you, and then you give that love, you share it. You can’t give what you don’t have.”

While the Sisters at the Sacred Heart convent run a home for pregnant women, other Sisters do “visitation” work, answering crisis-calls for help. The principle of their work is that no pregnant girl is ever abandoned. Girls contact the Sisters through a crisis telephone number, or on-line, or through random encounters in the street, or through hospital social workers.

“Sometimes the need is very basic and practical, other times it’s emotional – each story is diferent. Often it’s a need for housing. Our work is to walk with the girls. And it has to be centred on love. If the Sisters love the girls, then the girls will love the babies. Our role is to help these girls at this special time in their lives.”

The Sisters at the Sacred Heart have their own convent life, each day starting early with Morning Prayer and Mass, followed by breakfast, and then the day’s tasks, punctuated by prayer including silent adoration of the Blessed Sacrament.

The Sisters spend four hours each day in prayer. There is a discreet but clear defnition between the convent and the girls’ accommodation, and the Sisters’ life is clearly respected. Their guests are invited, but not required, to attend Mass and to use the chapel for prayer.

As a new religious order, the Sisters of Life refect an open post-Vatican II approach: the Sisters keep contact with their families and go home for ten days each year. They are encouraged to attend family weddings and funerals. “Family is all connected with love and life. Of course there is a separation when you leave home and join the convent – but at the same time, to be part of a family is a gift. And we are all friends – I visit the families of other Sisters, there’s a real bond.”

No personal mobiles or computers

The sisters don’t have mobile phones – except when doing visitation work – and there is just one computer, for community use, and no TV.  “At frst that feels like a deprivation – but then it’s just so much more peaceful.” They wear a distinctive, traditional-style habit. In addition to their houses in New York, they are now in Toronto and in Denver, Colorado, and have just opened a new house in Philadelphia. They have established a strong regular presence at World Youth Day, promoting the message of “love and life” with talks and conferences, hosting speakers including politicians, lawyers, broadcasters and bishops. They run post-abortion counselling and retreats, and work with the New York archdiocesan pro-life ofce.

Cardinal O’Connor is much revered as their founder, and the convent in Manhattan has his picture in the hallway. They like to tell the story of how he had the thought that there could be a new religious order dedicated specifcally to the pro-life cause, and then prayed about it for fve years. Then, in response to an announcement in the Catholic New York magazine, several young women responded and a small group took part in an initial discernment retreat. The Order has grown and grown from there. They celebrate their Foundation Day each year on June 1 – Mother Agnes 24 Mary Donovan, their Mother Superior, was among the frst eight sisters, back in 1991. The Sisters have a close bond with the Dominican Sisters of St Cecilia, based in Tennessee, and the Religious Sisters of Mercy of Alma, who provided initial training and formation.

Sister Catherine Marie’s own decision to join the Sisters caused her family some surprise. “My mom was shocked! But then I reminded her that she had always prayed for each of us...and actually all the family has been very supportive. I think it’s much harder for girls who join us from families who don’t have that attitude, who don’t really understand. Parents worry that they are losing their daughter, that she will in a sense be controlled, won’t be free. But then when they see how we live, what we are doing, they see that their daughter is happy and knows what she is doing – and that’s what matters.”

The Sisters’ work is not easy – many of those they seek to help have complicated lives. Vulnerability, a sense of confusion in a difcult situation, lack of prudence in past decision-making, and perhaps a background in which afection and care and the transmission of moral values played little part, can all add up to some one who is not immediately open to mentoring and wise counsel. There can be anger, frustration, or simply an unwillingness to accept responsibilities. Essentially, responding to a vocation with the Sisters of Life means an invitation to some tough work.

The Sisters’ daily round is involved with practicalities of housing and babycare, advice, counselling and much human interaction; the central theme for the Sisters of Life is prayer.

“Cardinal O’Connor, pondering the whole question of abortion, kept returning to that message in Mark: 9 where we are reminded that some demons can only be cast out by prayer and fasting. That’s central to our work. That’s what our founder wanted us all to understand.”

There have been notable successes over the years, and the steady growth of the Order reveals a need within the pro-life cause that had perhaps not earlier been recognised: a practical understanding that this is a spiritual matter, that the widespread practice of abortion in western society really is an evil to be countered with a total commitment to Christ. Although the work is obviously innvolved with practicalities of housing and babycare, advice, counselling, and much human interaction, the central t