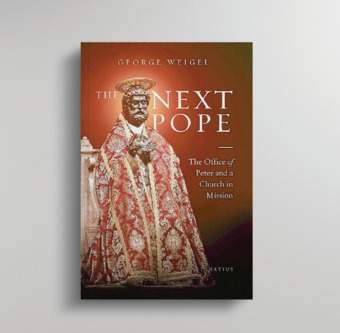 The last book written by Peter Hebblethwaite was  entitled The Next Pope, an Enquiry. It appeared after he died in 1994. This experienced Vaticanologist delved into the forces that he believed would produce the Pope to succeed St. John Paul II. He was not particularly attached to the Polish Pope; and, as I recall, he implied that he hoped that the pontificate would soon end.

As it turned out, eleven years were to pass before  the  next  Pontiff was elected, Benedict XVI, who in turn stepped aside to be replaced by Pope Francis in 2013. Speculating about the future    of the Papacy is always a precarious business. We never really know what is coming around the pontifical corner.

A Pope for a Church in Mission

The Next Pope, the Office of Peter and a Church in Mission takes a very different approach to what was implicit in Hebblethwaite’s writing. George Weigel, the biographer of St. John Paul, does not engage in speculation, nor does he lecture, regret or rebuke Popes living or deceased. He carefully avoids imposing any ideological agenda on a Pope. This is not one of those querulous traditionalist rants, nor is it a liberal shopping list for some deranged papal Santa Claus. Reading Weigel’s small book, one soon realizes that he only focuses on “the Office of Peter” in order to explore the  wider  and more urgent theme of “a Church in Mission”, the People of God as we move forward in this surprising twenty-first century. This book is about us.

The Next Pope Must...

However, in that broad ecclesial context, he does not hesitate to place a series of moral imperatives on the Pope who will serve and lead us in the future. His ten propositions or small theses appear in dark type preceding each chapter. Each begins firmly with “the next Pope must ...”, then focusing on the areas that he considers to be of priority in the life and future of “a Church in mission”.

In shaping these imperatives, George Weigel draws upon the achievements, teachings, hopes and vision of the popes of our times, from St Paul VI to Pope Francis. He draws on his personal knowledge of three of these Popes, especially St John Paul II, who is obviously his benchmark for the Office of Peter; after all, he is his biographer. At the same time, he reveals his endorsement of St Paul VI on evangelization. Did not his exhortation Evangelii Nuntiandi    set     the     gold     standard for post-conciliar papal teachings? He underlines the  need  for  intellectually  and   spiritually    coherent    Catholicism as proposed by Pope Benedict, and he endorses Pope Francis’ hopes for reform and peace. Underlying his approach to  the Petrine Office is a consistent loyalty to the teachings of the Second Vatican Council.

He prioritizes ten areas. ‘The Pope and…‘:the New Evangelization, the Office of Peter, the Fullness of the Catholic Faith, the Crisis of the Human Person and Christian Humanism, the Bishops, the Church’s Priests, the Lay Apostolate, the Reform of the Vatican, Ecumenism and Interreligious Dialogue, and World Affairs. The ten propositions and how they could be implemented in the Petrine ministry are preceded by a chapter on “The Holy Spirit and the Catholic Moment”, which sets the positive and hope-filled context. The book is rounded off by an appeal that all must be “Centred on Christ and the Gospel”.

Some will put the little book down and ask, “But how could any man live up to George Weigel’s ten imperatives?” There is always grace. The Holy Spirit sustains and guides the man elected to hold the office of Peter in the Church. On the other hand, having served for ten years in the Roman Curia, his book only reinforces my opinion that any Cardinal who yearns to be Pope must be either insane or a person of heroic sanctity.

Therefore, it is appropriate that, at the conclusion of this book, George Weigel should affirm that “…the next pope must be above all, a radically converted disciple: a man formed in the depth of his being   by the conviction that Jesus Christ is the incarnate Son of God, who reveals to the world the face of God the merciful Father and the truth about humanity, its dignity, and its destiny.”

The retired Auxiliary Bishop in Melbourne, Bishop Peter Elliott has had links with the Faith Movement since he was a seminarian in 1971.

By Bishop Peter Elliott
Share:Share on FacebookShare on TwitterShare on Google Plus