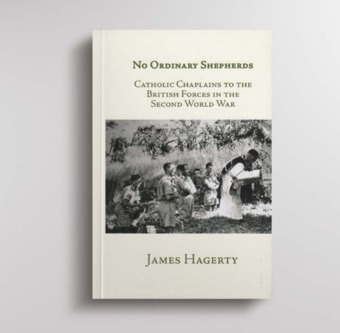 “You have been caught up in the maelstroms of war and thrown into the perils of battle and the temptations of a soldier’s life. No ordinary Shepherds of Souls are needed here.” Those words of Pope Pius XII addressing U.S. chaplains in Rome in June 1944 prompted this very fitting title to James Hagerty’s wide-ranging, meticulously researched book on Catholic Chaplains ministering to the British Armed Forces during the Second World War.

I have got to confess that when I first thumbed through this very handsomely produced, weighty book, my heart sank a bit – it looked exceedingly scholarly – as a dry, dusty and niche-like tome for the specialist historians. But … not a bit of it. I was hooked right from the beginning, because here is an easily accessible account that successfully combines the wide picture encompassing WW2 with the backcloth of ecclesiastical and inter-Service politicking, as well as the fascinating and often heroic stories of individual chaplains, on land, air and sea, in Europe and the East.

You are led effortlessly through the natural progression of events: the state of chaplaincy in the Armed Forces in the lead up to the War; the episcopal tensions of providing sufficient priests for a hugely expanding war fighting military force – to forestall a Catholic soldier being, “robbed of spiritual rations at this hour of trial.” I was struck by the  ignificant part played by priests from religious orders, and the large part played by priests from the

Irish Republic. Accompanying the individual Services, we are taken through the chaplains’ roles and experiences during all the major campaigns. The part of chaplains on Home Service is also explored, as of those interned in prisoner of war camps– German, Italian and Japanese; the challenges facing Army chaplains in post-war Germany; and then, for all chaplains, the prospect of demobilisation: “When the war is over… shall I have the courage to readjust myself to the monotonous humdrum life of a monastery after the excitement, glamour, freedom and devil may careness of Air Force life?”

There are interesting observations on how differently each Service regarded, and treated, their chaplains, as well as the contrasting experiences that chaplains in each Service faced: the Naval chaplain on a large shore establishment, or some sea going, but with all the ‘ship hopping’, rarely getting to know their ‘parishioners’; the Army chaplains invariably right in the thick of it on the front line, sharing the horrors of land combat; the Air Force chaplains at the operational bases anxiously awaiting returning sorties but unable to share first hand the combat experience of the aircrews (with one notable exception, who on a bombing raid witnessed “hell on earth”).

But it was the many detailed accounts of individual chaplains’ personal experiences that enhance and bring this book to reality: “Life,” wrote one, “was rough in the extreme but the work is very consoling.” Many received gallantry awards. Fr Reginald Moore, awarded the Military Cross during the siege of Monte Cassino, reflected: “There was a wounded man near our front lines, screaming in agony. The commanding officer said someone would have to go out and bring him in. So, I thought, ‘Golly! I’d better do it. So I did. Simple as that’.” There were those who found it difficult: “The life of a chaplain with a forward unit is one of great strain. By profession and by training a priest is a man of peace. He has not the excitement of fighting in the battle to sustain him.”

The chapter on Memories, Reflections and Assessments, draws this wealth of narration neatly together. There were moments of poignancy, highlighting the shock that many chaplains experienced – when sent from dioceses and religious orders – and being thrown straight into the rigours and idiosyncrasies of military life – in barracks, or the horrors of battle. They soon realised that military considerations always took priority, that temptations abounded in many guises whilst living outside the strictures of the parish or monastery. But above all, there was that common bond struck between the fighting man and the padre, and illustrated many times: as one chaplain serving in a warship under imminent German air attack testified: “…within ten minutes there was a record crowd reciting the Rosary on deck” - their prayers were answered as a thick sea mist enveloped the ships.

The desire of many Chaplains to relate directly with the men is also vivid: “There was no doubt that being a parachute chaplain made all the difference… He could truly say he was one of them, and the men for their part, liked to feel that chaplains were undergoing the same trials as themselves”. And this spirit lives on, as I can personally testify, having taken two Naval chaplains through the gruelling Commando course, both ‘suffering’ alongside the recruits, with no fear or favour, and gaining that ultimate respect from ‘the boys’ knowing that the green beret they wore was hard won.

And on from winning their green berets, I saw on many occasions our chaplains ‘getting stuck in’, exemplified by this incident during the Falklands war. Units of the Royal Marines Commando Brigade were poised below the Falkland Islands’ mountain strongholds of the Argentinian forces the night before they launched their major assault. The Marines in the defensive positions round the Commando Headquarters of one unit recognised the plaintive cry of their Padre, who was cautiously making his way back in the dark from visiting the forward rifle companies: “Boys! It’s me! Don’t shoot, because I’ve forgotten the f***cking Password!”, which can but only demonstrate the epitome of “that commonbond between the fighting man and the padre, for both fought in the same battle”. “The military and priestly life fit in well together as they both call for the same characteristics – perseverance, loyalty, courage, and a deep regard for one’s fellow men.”

David Baldwin is a Retired Royal Marines officer and Falklands War veteran. He has written several booklets on Pilgrimage for the Catholic Truth Society.