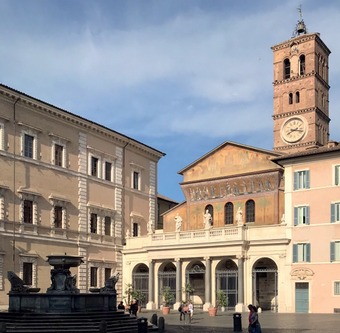 Discovering the churches of Trastevere

Share: Share on FacebookShare on TwitterShare on Google Plus
Discovering the churches of Trastevere
More British people than ever before now visit Rome. Donato Tallo invites pilgrims to explore the Eternal City.
In Trastevere, medieval meets the modern day: historical architecture, horticultural beauty, culinary delights, stunning churches, cobbled streets and Romanesque landmarks jostle with shops and cafes and bars.
Situated south of the Vatican the name originates from the Latin Trans Tiberim meaning “beyond the Tiber”, and was given to this area by the long-ago Romans who historically did not regard it as part of the wealthy and prosperous City of Rome. Over the centuries Trastevere has been home to fishermen and craftsmen and despite many changes in the area the picturesque and hard-wearing cobbled streets enable the old quarters of Rome to flourish today.
Window boxes rich in colour, greenery and foliage overflowing from rooftops and washing hanging from ancient houses across the narrow streets and alleyways produce a rustic charm. A deep inhalation of air offers the aroma of fresh bread, coffee, pizza and pastries and the sounds of church bells, fountains and vespers are plentiful throughout the day. In the summer no visitor is far away from an ice cream stall.
The area generates a huge income for the City with its many restaurants, cafes and shops. There is also a sense of tradition and history: feasts of the Church’s calendar are marked not only in the churches but with local events and festivals.
Beautiful
Trastevere is home to some of Rome’s most beautiful and significant churches. One of the most well-known is Santa Maria in Trastevere in the beautiful central piazza with a large fountain designed by Carlo Fontana in the late seventeenth century. The church is at the heart of Trastevere and has mosaics by Pietro Cavallni as well as an impressive bell tower and portico.
A short walk away from the central piazza is the church of Santa Cecilia in Trastevere, is home to a religious community who occupy the adjoining convent. The church is on the site of St Cecilias martyrdom in AD 230 and the crypt has her shrine, located beneath the main body of the church: and is most definitely worth a visit and incidentally beautifully cool in a Roman summer’s heat.
The Tiber
The church of San Crisogono, not far from the Tiber, is famous for being built on the site of one of the City’s oldest private houses that was used for Christian worship. The interior has contains some fine frescos and mosaics.
The church of San Dorotea is one of the smallest in the Trastevere and is close to the Ponte Sisto. Its simple exterior invites the visitor to explore further: the bones of St Dorothy lie beneath the high altar and has some beautiful stained-glass windows that add to the peaceful and prayerful atmosphere inside.
No visit to Rome would be complete without a visit to Trastevere: ponder the history, reflect on the fact that we still honour the saints and martyrs whose relics are here, and allow it all to nourish your faith!

Donato Tallo works in healthcare and writes for various Catholic publications
Share:Share on FacebookShare on TwitterShare on Google Plus