At the Easter Vigil after the first reading from Genesis chapter 1, describing the creation of the universe by God, the prayer that follows says: “Almighty ever-living God, who are wonderful in the ordering of all your works, may those you have redeemed understand that there exists nothing more marvellous than the world’s creation in the beginning except that, at the end of the ages, Christ our Passover has been sacrificed.”

The drama of our redemption from sin is not to be denied, especially during Holy Saturday, but the first part of this prayer, and indeed the start of the book of Genesis, can easily be glossed over. The importance of this presentation is that God creates the world out of love and keeps it in being as an act of love, and that this creative act is, as it were, focussed through Christ as the very mind of God, the Logos, as described in the Gospel of John and as foreshadowed in Wisdom literature in the Old Testament. This ‘Scotist’ view of the Incarnation as part of God’s original plan, independent of human sin, is key to the Faith movement’s vision of created reality, grace and nature.

The beginnings of experimental science implied no contradiction between faith and reason. Newton himself saw gravity, a key element of his own study in physics, as implying, perhaps, a supernatural mediating power. In a letter to Richard Bentley, Newton wrote:

“‘Tis inconceivable that inanimate brute matter should (without the mediation of something else which is not material) operate and affect other matter without mutual contact...Gravity must be caused by an agent acting constantly according to certain laws, but whether this agent be material or immaterial is a question I left to the consideration of my readers.”1

Newton was not orthodox in his theology and, of course, we do not need a supernatural  mediator  to  describe  gravity  –  Einstein’s  General  Relativity  will suffice – but the supernatural and the natural/physical are correlative in the Faith theology. Truth cannot contradict truth, so when I read about the recent discovery of gravitational waves I was both excited, as a physics teacher, and delighted as a Catholic, seeing in this another sign of God’s creative power and wisdom manifested in  the  universe.  The  underlying  gravitational  mathematics  I  view  as  a  specific delineation of a particular physical aspect of the essential structure of created reality, the Unity-Law of control and direction.

On 11th February, the LIGO (Laser Interferometer Gravitational-Wave Observatory) collaboration announced that it had detected gravitational waves, as predicted by Einstein. The published paper 2 involved getting 1,000 researchers to agree, involving around 5,000 e-mails. The discovery launches the field of gravitational-wave astronomy, enabling studies into the structure and origins of the universe.

According to David Castelvecchi’s account in Nature 3, Marco Drago, at the Max Planck Institute for Gravitational Physics in Hanover, Germany, saw a graph showing the signature ripples in spacetime produced when two black holes collide. At first he thought it must be one of a series of “injections”, test signals to ensure that the detectors are running correctly, but then found no such injections had taken place at that time. Gabriela González, a LIGO physicist, took data for another month to compare the graph with the natural ‘noise’ from the detectors. This verified that the graph was showing a true signal. The researchers then performed computer simulations. These confirmed that the data matched the predictions of Einstein’s general theory of relativity, made in 1915.

As the two black holes orbited each other (past tenses have to be used because such astronomical observations involve looking back into time), they warped the fabric of spacetime, generating gravitational waves for an estimated 1.3 billion years.

There are two LIGO stations, 3,000 km apart, in Louisiana and Washington. LIGO’s twin interferometers bounce laser beams between mirrors at the opposite ends of L-shaped, perpendicular, 4-kilometre-long vacuum pipes, as shown in the diagram below4. A gravitational wave will alter the length of the pipes, causing the lengths of the laser beams to vary very slightly.

As physics students will know well, the slight differences in path length for waves superposing cause interference patterns, rather like the rainbow effect on a patch of oil on the road or the colours formed by the surface of a DVD.

By the  time the waves from the black-hole  merger  arrived,  they  had  become tiny ripples, changing the length of the pipes by just 1 part in 1 billion trillion. Both LIGO stations detected the signal at essentially the same time, indicating that the signals were coming from the same event. Although astronomers had accumulated compelling evidence for black holes by observing their surroundings, the LIGO signal is the first real direct proof of their existence.

Some would question the value of spending $200m used to upgrade LIGO, asking “What use is this knowledge?”, yet all of us as humans have a God-given intellect. It is that inquiring mind that seeks to know the mind of God as it is imprinted on the material universe, God, who are wonderful in the ordering of all your works. 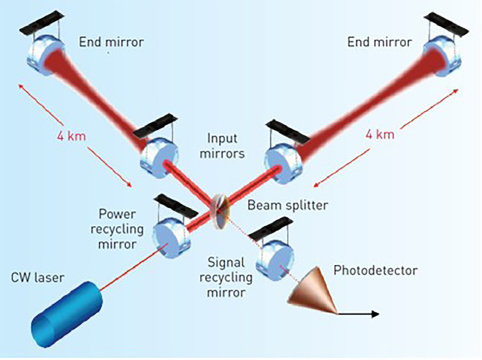 By Dr Gregory Farrelly
Share:Share on FacebookShare on TwitterShare on Google Plus