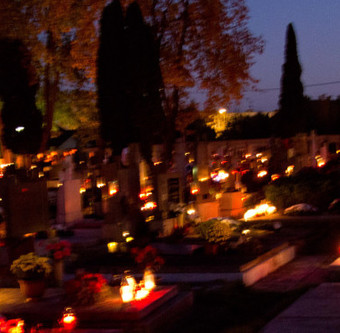 With anything new there are inevitability lots of questions.

It does get a little tiresome having to answer some of them again and again. Among long-time Catholics, there is still a sense of mild confusion about the Ordinariate of Our Lady of Walsingham. Their questions reflect both a genuine desire to appear concerned and interested, and a frank curiosity: “Are you happy now you’re a Catholic?” “D’you miss anything from the C of E?”, and – this last apparently without anD deliberate intention to offend – “Will the Ordinariate last?” The inflection of the voice, the questioning look and the gentle shake of the head from side to side, denotes how keen – or otherwise – they are that it should! But the reality is that whatever individual hopes or desires, the Apostolic Constitution Anglicanorum Ceotibus is here to stay.

We start at a major disadvantage. All other institutions in the Catholic Church began at grassroots, whether it’s a diocese or a religious community. From an idea through discernment, to reports and discussions, they ended with a petition to, and recognition from, the Holy See. The Ordinariate, has, quite literally, had to hit the ground running.

Nevertheless, people want a measure, something tangible, and in the case of the Ordinariate, many have opted to make that the Ordinariate Liturgy. But there are other things that are so much more important. Being in the Ordinariate has brought a great deal of joy, and looks set to bring more. As Anglicans, we had reached a point of enormous difficulty. The Anglican Communion no longer made any sort of coherent sense in terms of its ecclesiology, and although day-to-day life in the parish still had all its consolations, the bigger picture for Anglo-Catholics was, to put it mildly, exasperating. The invitation of the Holy Father to full communion came in response to many discussions over many years. There were groups of CofE bishops and others lying to Rome to seek unity. There was a great, great longing among us for union with Peter. When the invitation arrived from Benedict XVI to create an Ordinariate, there could really be only one response. It is puzzling that those many Anglican bishops whose requests for help were fully met in Rome, having been given what they sought, then chose not to respond. Peter said, “Come!” and they said “No”, or at least, “Not yet”. This is dispiriting for us who attended Forward in Faith assemblies year after year: we had discussed statements and resolutions, and planned provisions and structures through which we could dialogue with Rome for unity, because, as we heard often ‘Peter is the rock from which we are hewn’.

Imagine our genuine concern for our former colleges in the CofE today: their position is now bleak. All hopes for any provision within the CofE fade further and further away – the invention of women bishops means that any notion of sacramental assurance is now inevitably confused, and trying to find some sort of safe corner becomes surreal. The Ordinariate was essentially the one-solution offer: there isn’t going to be any other negotiated deal. Their decision not to join us is not a non-decision. It has placed them in a weaker position than ever – and we sense their loss too. Everyone is the poorer for it. How we pray and long for them to join us!

And how do things in the Ordinariate stand now? In today’s culture, people want instant, microwave results. But this is not the way of the Holy Spirit. There are many wonderful things happening for member of the Ordinariates which, by deinition, cannot be measured. Indeed, any new initiative like this is going to have a slow start, and some tensions and complications – a glance at (or better, a serious examination of) the history of all missionary initiatives or religious orders will reveal that. And the stirrings and emotions of people’s hearts cannot be measured.

A question that people tend not to ask is “How can we help?” Instead, they want to ofer what they see as solutions to problems that we do not have. There is something of a claiming of the heart of the Ordinariate. People tell us what it should be like; or how they see it. Now that we are safely within Peter’s fold and the full communion of the Catholic Church, people seem to want a piece of us: they come with eagerness – campaigners for the Extraordinary Form, enthusiasts for a New Movement or some other group. People are keen to tell us what we should do and how we should do it. Most will be perfectly genuine in thinking that they are offering a helping hand rather than any sort of intrusion or interference.

Similarly, cradle Catholics with a vaguely romantic attachment to an Anglicanism they have never experienced seem to enjoy telling us what sort of liturgy we ought to use and why we ought to use it. And there is also the slight tendency for some Catholics who have their own tensions with the bishops or with other authority, and seek in us some sort of mutual resentment-fest. We don’t want to seem ungrateful but...

On liturgy, the reality is that the liturgical traditions from which the Ordinariate members come are varied. Some, for example, were firmly rooted in the Book of Common Prayer; some always used the standard Roman Rite in varying styles. The Anglican patrimony that we inherited and value gives us a certain relish for diversity - no “one size its all” mentality – in liturgy and styles of mission. All is now solidly set on the authority Christ gave to Peter and his successors. It is impossible to convey adequately just what that means – to be free of any need to form lobby groups to ensure a majority vote on some major point of doctrine. We know that we are secure.

Is everything going well with the Ordinariate? Of course not – and whenever people in the Church think smugly that everything is going well, it usually isn’t. But we come into the Catholic Church with a great sense of joy that we want to share – that’s what mission is! We also come receiving more than we are bringing, and for that we are grateful, especially to all who have been welcoming and supportive.

So what next? We are in a good place at the moment. We have committed members who have joined the Catholic Church at some cost; we have priests with long pastoral and priestly service who left livelihoods and friends; and we have a committed, energetic and determined Ordinary in Monsignor Keith Newton. This is a good well-resourced start! Next we need enthusiasm from all angles. From those Anglicans who desire unity with the successor of Peter, we encourage you not to be afraid, but step out into the deep and trust the Lord who calls you. From those now Catholic but who were once Anglican, we encourage you to join. Anglicanism is from where you come, and it formed you, so like us you will not want to despise it, but rejoice in that heritage. For those who have been Catholic since baptism, we encourage you to see what this treasure is that we are invited to bring to the Catholic Church. Invite one of us to talk at your parish, or come and see one of the many Ordinariate groups around the country. To bishops, we encourage you to welcome an Ordinate group in your diocese and entrust them with the pastoral care of a parish. And if you’re not sure what you can do, do the most important and very best thing: pray for us.