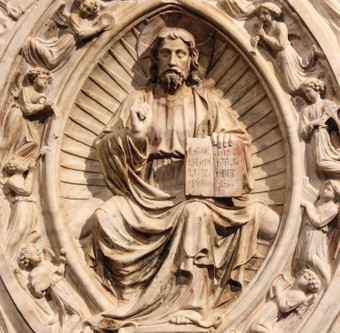 Holloway on… Sacramentum Mundi: The Evidence for Jesus Part II

Share: Share on FacebookShare on TwitterShare on Google Plus
The evidence for Jesus, God incarnate, the Word made Flesh, begins most immediately with Mankind. First, the making of man as a synthesis of living matter and spirit. We can show how the living body, through that unique brain which alone in all nature is the brain of man, needs the soul of its own material formulation, and requires the non-material spirit as its principle of life formation and personality. The relationship is equally true, whether in a philosophy of ordered evolution, which gives a much greater majesty to the process, or of direct creation. If we postulate the creation of man by an ordered evolution, then we keep the Unity of the Unity-Law within which all being is framed in the beginning, as a much more majestic economy. We can also show how Man is at once continuous with natural evolution through the body but a special creation — through the soul, for God alone and directly can create the spiritual energy. The soul cannot evolve. Angels neither marry nor beget, because they are totally spiritual in nature.

The thrill about this line of evidence for Jesus, is that Man, breathed by God into a new dimension of being, needs a new dimension of the Unity-Law, to give him his control, his direction, and his fulfilment in being. All life forms less than mankind are controlled by the law of fulfilment, personal and according to their species, by the law which is within the interplay upon them of nature around, the impact of earth and light, and air, and forest, and their inbuilt nature and its brain … in a word, by the environment that is of their own kind and is the closed cycle of material, deterministic being. With us, when you get to us, it is different. We are made into a new dimension. We live, learn, think, and are fulfilled by intellect and free thinking reason, by the inward knowledge and by its expression in the spoken word, because in man, the soul synthesized with mattter, needs both the inner word of understanding, the word of prayer and consciousness of God, and also the word expressed with matter.

The answer to man’s question to God

In this Editorial from 1985 Fr.Holloway was reflecting on a TV programme, ‘The Evidence for Jesus’.
The first part appeared in our previous issue.
Share:Share on FacebookShare on TwitterShare on Google Plus

New Guidance from Rome
FAITH magazine hails the arrival of the new Directory of Catechetics. This is important – indeed essential – for our Catholic schools. It updates and affirms the previous Directory, and issues some useful and practical guidelines for those charged with teaching the Catholic Faith.
In particular, the Directory tackles a topic much discussed in the West today. Are men and women different? Should we speak of the two sexes as being different from one another? Are we allowed to teach the facts of biological differences between males and females?
Read More

The New Evangelisation: how are we to do it?

The New Evangelisation: how are we to do it?
Philip Trower explores ways of communicating the Faith
Some of the things our Holy Father, Pope Francis, has been saying since he became Pope about the way the faith should be presented and taught as a preamble to the new evangeliation have unquestionably ruffled a few feathers. However, I have increasingly come to think that there would be less misunderstanding if more people were aware of a development that has been taking place in the Church’s thinking and teaching on this subject over the last fifty years. This development seems to have begun at the time of Vatican Two, and, in a modified form, has been accepted by subsequent popes and episcopal synods. But only, I would say, in the last few years have a significant section of the theologically-minded faithful become aware of it.
Read More

Holloway on The “Dignity of Womanhood”

Holloway on… The Apostolic Letter “Dignity of Womanhood” - Part 1

In this Editorial from the January/February 1989 issue of FAITH, Fr Holloway admires Pope St. John Paul II’s landmark document on womanhood but identifies a lack of a coherent theology of the sexes. In Part 2 of the Editorial, which will be published in our next issue, he suggests a further theological development.
Read More

China and Christianity
China in Life’s Foreground by Audrey G. Donnithorne, Australian Scholarly Productions, 435pp; paperback £25.00, Kindle version £7.66 reviewed by Joanna Bogle
At a time when China is so much in the news – the Coronavirus, trade wars, the West’s recognition of China’s growing
global power and influence – a book with the title China in Life’s Foreground seems an all too appropriate read.
Read More

The Faith Movement
Father Roger Nesbitt produced an account of the Faith Movement some years ago, published by the Catholic Truth Society as part of a series on the New Movements in the Church. We offer an updated version here for a new generation attending Faith Movement events and discovering the Movement and its message.
Read More