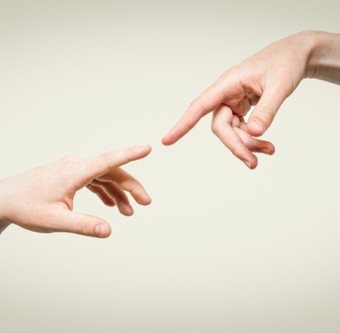 In the Prologue to St. John's Gospel concerning the Logos, the Word; we read:

In the perspective of the FAITH Movement, the Son of God incarnate comes as Son of Man, as God’s self-revelation to us by taking on flesh, our flesh, as a communication of His love. Yet there is another aspect: “his own people received him not”. Now, God's love for us will have to take on a new meaning because of the impact of human sin.

Genesis chapter 1 gives a poetic narrative of human creation, neither a fairy story nor a modern, scientific account. The first humans, Adam and Eve, are forbidden from the experience of evil (described as the “tree of the knowledge of good and evil”), but the 'serpent' tempts Eve and they sin, disrupting the harmony of Paradise, the latter described as “walking in the cool of the evening air”. This 'original sin', i.e. sin at the origin of the human race, involves fundamental damage to the spirit-body relationship. In other words, the soul, as centre of personality, as the Unity-Law of the material body, has been impaired in its power to control. Original sin has caused damage to the body-soul dynamic, thus also to the soul-God relationship and has disrupted the human person’s relationship within the material and spiritual environment. The body is now no longer perfectly controlled by the soul – there is a sort of civil war:

As a result of original sin God's very existence is no longer obvious to us and our conscience is no longer always an accurate guide to what is right and wrong. What is right does not always feel good, and what is wrong does not always feel bad. Also, we suffer from concupiscence: disordered desire: desire out of context, as it were, such as over-eating, sexual intercourse arising from lust rather than in a married state of love open to God's procreative and unitive will. As St. Thomas Aquinas wrote:

The result of this original rejection of our true meaning within the dynamic interplay of spirit and matter that has been described as the Unity-Law is that as soon as a new human being is procreated, this flaw in the perfect ‘script’ of our being, namely original sin, is inherited in the same way as the inheritance of a genetic defect by the unborn child within a mother's womb. The lesion in our human material nature interacts adversely with our human spiritual soul: “The spirit is willing, but the flesh is weak” [Mk 14]. For the first time God’s Unity-Law of Control and Direction is violated, breaking the true harmony of our very being. As humans, we alone display the myriad psychological neuroses associated with this imbalance at the heart of our identity, our personality. We are impaired in our proper self-love and in our ability to love others and God.

In this perspective, Mary's cooperation with God, her 'fiat' ( Latin for 'let it be done') is the human 'Yes' to the Incarnation, contrasted with Adam and Eve's “No!”. Our progenitors sinned, wounding human nature. We inherit the same human nature (genetically), thus the body-soul harmony is wounded from the beginning. Mary's Immaculate Conception, her freedom from original sin is a sign of our original grace, our original loving relationship with God, without damage or dysfunction. Our Lady’s Immaculate Conception, in this view, is necessary in order that her child, Jesus, should not inherit this lesion. This is all the more appropriate if, as we propose, Jesus' birth is predestined before sin.

St. Paul, in Romans chapter 5, presents Jesus as the “new Adam”, a striking image since Adam was the original human, made in God's image, focussed though the Mind of Christ and vivified by the Holy Spirit. Christ, the new Adam, now comes to restore the original order of God's creation, thus restoring our spirit-matter and spirit-God ecosystem, restoring our relationship with the Father through the work of the Holy Spirit.

In the FAITH theology we have a particular use for the word “Saviour” as referring to Christ as being the “Son of Man”, the revelation to us of the loving God who holds all things in being through the Unity-Law and thus the revelation of our own true nature. In this 'Scotist' view of the Incarnation, Christ as Saviour would have become incarnate as a revelation of God's love, independent of human sin. The term “Redeemer”, then, we reserve for Christ's specific role in removing sin by restoring in us the original and intrinsic unity of spirit and matter.

All matter is, and has always been, centred on Christ, the Master-Key of the universe itself. The Unity-Law  is an intrinsic law of control and direction; the material world, and the unique pace of humanity within it, is directed towards God intrinsically. The Incarnation, then, is Christ 'coming into His own' as a divine act of love; this was always God’s plan. However, with the damaged set of relationships that results from original sin, when Christ comes into the world, He now experiences the pain of that wounded relationship between matter and spirit, body and soul, God and Man, as a profound agony of sorrow., perhaps nowhere more graphically described than in the sweat of blood (Luke 22:44).

With his free human will, Jesus shows his utter love for us, taking our sin on Himself by allowing Himself to be crucified, thus crucifying Sin itself. This is not to appease an angry God the Father, but a voluntary loving self-submission, an act of humble love, shown in this ultimate act but also throughout Jesus' public ministry. Christ is the perfect, life-giving offering of Himself, on our behalf, a living sacrifice for sin. Christ's passion and death is not something passive but an active offering of self-giving love; this is the work of redemption. Christ heals us from within, organically, rather than extrinsically like some judicial pardon..

The Resurrection is the real indication of Christ's power over death and sin, of course, but also of His power over matter: matter is raised to new potentialities, new relationships , as shown by His Risen Body being able to pass through walls, no longer materially confined by time and space as before, an indication of our own future bodily lives in the state called 'heaven'.  These new relationships of being also allow a deeper understanding of transubstantiation, the changing of bread and wine into the Body and Blood of Christ, Christ's risen body, as a new relationality of being.

Christ reconfigures human nature according to His own perfect, sinless human nature. He can redeem us precisely because He is of our flesh. St. Paul gives a beautiful presentation of Christ as Saviour and Redeemer in this passage:

He is the image of the invisible God, the first-born of all creation; for in him all things were created, in heaven and on earth, visible and invisible, whether thrones or dominions or principalities or authorities--all things were created through him and for him. He is before all things, and in him all things hold together. He is the head of the body, the church; he is the beginning, the first-born from the dead, that in everything he might be pre-eminent. For in him all the fullness of God was pleased to dwell, and through him to reconcile to himself all things, whether on earth or in heaven, making peace by the blood of his cross.” [Col 1:15-21].

Pope Francis declared a Year of Mercy (8 December 2015 to 20 November 2016) with an unusual  logo showing Christ carrying a man. This man looks identical to Jesus. I interpret this to mean that the Son of Man, Jesus, has come to his own flesh, his own family and by His supreme love, carries us back to the Father, to our natural and supernatural home, through His redemptive love.

Created matter arises from God’s love as the work of Christ, the Logos, the Mind of God. The universe is not a dark, inert set of atoms governed by physical laws that are mere projections of human effort but show that science itself indicates that the universe, indeed all things, are governed by a Unity-Law of Control and Direction, an intrinsic relationality, that God is ‘the sunshine of the soul’ and His Son, Jesus, is our Saviour and Redeemer. We are all loved and that none of us is beyond the power of forgiveness because Christ Himself offers us true healing and life.It is all echoed in the concluding doxology of the Eucharistic prayer:

“Through Him, and with Him, and in Him, O God, almighty Father, in the unity of the Holy Spirit, all glory and honour is yours for ever and ever.”

By Gregory Farrelly
Share:Share on FacebookShare on TwitterShare on Google Plus