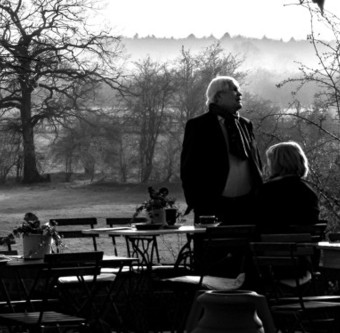 Not many serious magazines publish poetry today. FAITH magazine makes the occasional contribution in that department. And the other, better known, magazine that does it rather well is the Spectator.
Who are the poets whose work enhances those pages? One of them sits opposite me in the pub near Westminster Cathedral: Richard Ormrod, who is also a biographer and a book reviewer, including for FAITH magazine.
We are meeting to discuss his latest biography - of poet and Anglican clergyman Andrew Young, whose work was much admired by CS Lewis. Ormrod sees him as a sadly neglected figure, whose love of nature and concern for what is today called “the environment” make him relevant today and with a message that needs to be heard. “Young’s deeply observant, unsentimental nature poetry challenges us. It’s important, and it speaks to a generation that is becoming aware of its own lack of link with the natural world.”
Catholic Church
Ormrod has himself been writing poetry since he was twelve, but only seriously for the last ten years. He is a convert to the Catholic Church from the Anglo-Catholic wing of theCofE.
“I was definitely High Church. In fact I honestly thought of myself as Catholic – but Catholic within the Church of England. But then I came to see that so many Anglicans simply didn’t see themselves that way. While I regarded Mass as the priority, others
simply didn’t grasp its importance in that way at all.
“I found myself wondering what church I could attend: there was such a multiplicity of Anglican churches with differing views. Eventually I went along to the Catholic chaplaincy at Birmingham University, and it all made sense from there. I joined the RCIA group and went forward.”
That was in 1997 and he hasn’t looked back. In 2008 he wrote his PhD thesis on the experiences of Anglicans joining the Catholic Church from the years 1945 to 2005. “That involved interviewing a number of people who were extremely helpful,  including Lord Carey, the retired Archbishop of Canterbury, and Cardinal Murphy-O’Connor. The thesis covered a period of 60 years, and a particularly interesting period.”
Themes
His poetry does not explore only Christian themes, but frequently does so. “And it’s not, of course, a question of simply re-asserting belief. Like most Christians, I know all about doubts. There’s that prayer that makes so much sense: Lord, I believe…but help my unbelief.’”
In addition to being published in the Spectator, Ormrod’s work has been published in specialist poetry magazines and in the Salzburg Review. A recent significant poem was one written to commemorate the 100th anniversary of the death of WWI poet Edward Thomas. But his main work is as a biographer and also as an academic, teaching and lecturing in creative writing for the Open University. “There’s a point of view which states that writing prose stifles your poetry and I think there’s some truth in that.”
Hopkins, Eliot, and Newman
His admires the work of Gerard Manley Hopkins and T. S. Eliot and “most of all, of course, John Henry Newman. My copy of the Apologia has so many markers in it, page after page…”
We end up talking about Newman, his importance, the message he holds for us all.
“He’s my all-time hero – as he is for so many. It’s impossible not to be moved by that image of him preaching for that final time at Littlemore…the parting of friends…when he laid his preaching bands on the pulpit, knowing he would never take them up again.”
Is there scope for good Christian poetry today?
“Yes, of course. But – well – like so much else, it does require a real love of language, a knowledge of prosody, and indeed of the Faith. It can’t just be an expression of the ego, or about self-expression. I think that’s something that is hard for people to grasp today.” He pauses, then adds: “The main problem, really, remains the lack of publishing opportunities beyond parish magazine level. Isn’t it about time somebody started a quarterly magazine called something like Contemporary Christian Poetry?”
CRUCIFIXION
This death was like no other
harsher wilder, more bitter
than myrrh or Mary’s tears –
this death defied natural law,
or logic, though foretold
generations before…
This death was like no other
before or since – not even
the Slaughter of the Innocents,
the Infanta’s Inquisition
or the ovens of Auschwitz –
this death was beyond death.
This death was like no other:
cruder, crueller, yet kinder
than mercy or medicine –
sweeter than wild honey,
more lethal than locusts
or the plagues of Egypt;
This death was like no other:
stranger, stronger, finer than
gossamer, or cloth of gold –
a love-poem to humanity,
richer, more resonant than
any adagio, or painted pieta;
This death was like no other:
it rents the temple of earthly
vanities, leaving only this –
Christ always is: with
our sin riveted to a tree,
this death killed death.
Richard Ormrod.