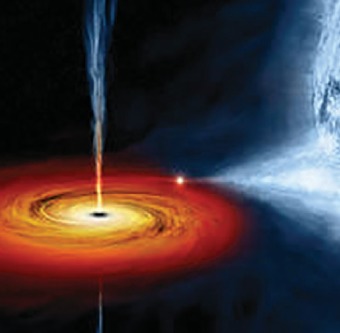 Roger Penrose, of the University of Oxford, was the joint recipient of the 2020 Nobel Prize for Physics. The citation stated:

“Three Laureates share this year’s Nobel Prize in Physics for their discoveries about one of the most exotic phenomena in the universe, the black hole. Roger Penrose showed that the general theory of relativity leads to the formation of black holes. Reinhard Genzel and Andrea Ghez discovered that an invisible and extremely heavy object governs the orbits of stars at the centre of our galaxy. A supermassive black hole is the only currently known explanation.”

The image above shows matter ‘falling into’ to a Black Hole. Black Holes are called black because they are so dense that their gravity is strong enough to prevent anything, even light, escaping. According to current astrophysics, they are formed as a neutron star collapses in on itself.

It was in 1965 that Penrose proved that black holes have at their heart a ‘singularity’ in which  all the known laws of nature cease, still regarded as the most important contribution to the general theory of relativity since Einstein.

Singularities are well-known mathematical entities that are not defined or that lead to infinities, such as the function 1/x as x ap proaches zero. In fact, there are different orders of infinity in number theory. The natural numbers (counting 1,2,3…) etc. have no limit, i.e. they are infinite, yet they are ‘countable’, whereas it can be proved mathematically that the set of ‘real’ numbers (a specific mathematical term including things like the square root of 2) are also infinite but ‘uncountable’.

The singularities concerned in Black Holes are regions at which the known ‘laws’ of physics are not valid. These laws, such as the principle of conservation of mass energy, had been held to be valid at all times and all places. Mathematics  is  essential  in understanding physics but nowhere more so than in fundamental features of the universe such as Black Hole singularities. Indeed, one might state that they  are mathematical entities first and foremost; we cannot detect or measure physical singularities.

The theory of General Relativity, invented by Einstein at the begin ning of the twentieth century, involves the notion that the mathematical fabric of spacetime is warped by masses (rather like a flexible, extendable/compressible sheet of graph paper), so a large gravitational force due to a star, for example, warps spacetime, causing light, particle trajectories, etc. to be curved. This theory has been verified by astronomical observations.

Penrose, often described as a mathematician, applied his intellect to showing that this theory implies the existence of Black Holes and, further, that at the centre of each Black Hole there is a singularity, the mathematical entity now a physical reality.

Einstein did not believe in the existence of Black Holes but in 2016 the first direct detection of gravitational waves occurred, the first observation of a Black Hole merger. It is now believed that they exist at the centre of every galaxy; the supermassive black hole at the centre of our own Milky Way galaxy is called Sagittarius A with a mass equal to about 4 million suns. Such black holes are thought to have been made at the same time as the galaxy they are in thus they are important in theories of cosmological evolution.

For those who are not  overly  interested  in  cosmology,  physics or mathematics, this may seem to be of little  interest,  yet  as Pope Saint John Paul II states at the beginning of his encyclical, Fides et Ratio:“...the more human beings know reality and the world, the more they know themselves in their uniqueness, with the question of the meaning of things and of their very existence becoming ever more pressing. This is why all that is the object of our knowledge becomes a part of our life” (1).

It is a sad fact that the majority of western physicists are atheists. Their atheism is generally based on a positivist view in which since we know from experience that science works, we can trust  it, unlike religious claims. Science is falsifiable, thus neither dogmatic nor arbitrary, whereas religious doctrine claims to transcend the physical universe and to have an external authority (which, however, only the believer trusts). Penrose, to his credit, has engaged in courteous and considered debate with theists, such as the debate between him and the philosopher William Lane Craig: https://www.youtube.com/watch?v=9wLtCqm72-Y

It is clear that we need some philosophical clarity here and in particular a modern metaphysics to make sense of scientific and human reality. Unfortunately, much modern philosophy has denigrated metaphysics or allowed it to become a rather isolated study, irrelevant to most thinkers.

The physical universe seems to have first claim to be real. We literally bump into ‘objects’ all the time, but what about atoms or quarks? We don’t really bump into them nor can we see them directly. However, we trust in the scientific theories that describe genuine phenomena, such as alpha radiation, that such theories seek to describe. If the theories are found to need alteration, they are changed (such as Newton’s theory of gravitation being changed to the General Theory of Relativity).

Where do these theories come? From the human mind. Furthermore, it is clear that the extraordinary intellectual achievements of Einstein, Penrose and others are not due to some biological evolutionary dynamic. There is no clear ´biological advantage´ resulting from Penrose’s analysis of General Relativity. The human mind, and thus science itself, transcends the purely physi cal. This is of key importance.

What of mathematical reality? Mathematics is ‘pure’, entirely a product of the human mind; no other animals show evidence of mathematics. It is demanded of mathematical theories that they be consistent, not selfcontradictory. The extraordinary thing, at first glance, is that the physical universe should prove to be mathematical. Mathematics is not, in and of itself, physical but purely logical, deriving from a small set of axioms, e.g. that a line has no width, or that a point has no size, things impossible in physical reality (at least macroscopically).

What is needed for a fuller understanding of reality is a metaphysics which is related to the philosophy of modern science, coherent and correspondent with all aspects of reality, physical and human. This is at the heart of the Faith perspective of theology. As Fr Edward Holloway put it:

“If the poising of the initial equations of energy from which we ourselves derive contained the future history of man as a necessary potential, then that flux of energies is only intelligible if it is mathematically correlated to an existent Unity which is also Mind.”

Holloway’s metaphysics relates the transcendence of the human mind with both the structure of physical reality as a unity and with the ultimate transcendent being, God. ‘Mind’ is viewed in this philosophy as having control over matter, the finality of the universe being God’s Mind such that the physical universe has an underlying

´Unity-Law´. Holloway shows that this transcendence implies a supramaterial nature, something ‘spiritual’. The human mind’s transcendence over mere material requirements indicates that we have a spiritual nature, the soul. In fact, in this context, God can be said to be the human ‘Environer’ just as the physical earth and solar system, etc. form our environment.

It is essential, then, that in any description of reality, any metaphysics, the human person is not regarded as merely a complex collection of interacting cells, nor that religious and moral beliefs be labelled as ‘stories’, an error in some educational and catechetical approaches. Many atheist debates against theists, usually Christians, indicate that the atheist is being completely reductionist, i.e. not allowing for the possibility of the existence any being beyond what the sciences describe, thus ‘fixing the odds’ against the theist, whereas, in the words of St. John Paul II: “reality and truth ...transcend the factual and the empirical, and ...vindicate the human being’s capacity to know this transcendent and metaphysical  dimension  in  a  way  that  is true and certain, albeit imperfect and analogical.”

It is equally important that Christian philosophers and theologians do not state or imply that the theological has no relation to the scientific or physical. Truth cannot contradict truth and since we believe rightly that God is the Creator of the universe:

“the search for truth, even when it concerns a finite reality of the world ...always points beyond to something higher than the immediate object of study,” [FR 106]

Atheistic ‘scientism’, the idea that the physical sciences alone contain what is true, generally has the upper hand in the popular western mind. It is time to change that with reasoned argument but it  does require a suitable metaphysics, such, I would suggest, as in Fr Holloway’s theology.

We should rejoice in the astounding intellectual achievement of Penrose and others as demonstrating the intellectual gifts that God has given to humanity, showing the transcendence of the human mind. As scientism ends up in a sort of ‘worship’ of science and a denigration of religion, objective morality, etc., it is worth recalling the words of St. Paul, concerning the worship of Zeus in Athens, the centre of the philosophical world at that time. Epimenides (6th or 7th century B.C.) had written a poem defending the immortality of Zeus as follows:

They fashioned a tomb for you, holy and high one, Cretans, always liars, evil beasts, idle bellies.But you are not dead: you live and abide forever, For in you we live and move and have our being.

“..Paul, standing in the middle of the Areopagus, said: “Men of Athens, I perceive that in every way you are very religious. For as   I passed along, and observed the objects of your worship, I found also an altar with this inscription, ‘To an unknown god.’ What therefore you worship as unknown, this I proclaim to you. The God who made the world and everything in it, being Lord of heaven and earth, does not live in shrines made by man, nor is he served by human hands, as though he needed anything, since he himself gives to all men life and breath and everything. And he made from one every nation of men to live on all the face of the earth, having determined allotted periods and the boundaries of their habitation, that they should seek God, in the hope that they might feel after him and find him. Yet he is not far from each one of us for ‘In him we live and move and have our being’” [Acts 17:22-28].

Gregory Farrelly is a teacher of physics and a lay theologian.

By Dr Gregory Farrelly
Share:Share on FacebookShare on TwitterShare on Google Plus

Britain became familiar with a new vocabulary in 2020: Covid, lockdown, self-isolating. Does the Church have something to say about all of this? Yes – and, when we are allowed, something to sing about, too.

Fratelli Tutti: In Search of a New Vision of Fraternal Love

Monsignor Patrick Burke considers Fratelli Tutti (Italian for “Brothers All”), the latest publication from the pen of Pope Francis.

Joanna Bogle talks to Archbishop John Wilson about his first year as Archbishop of Southwark.

A Christian View of Relationships and Sex Education