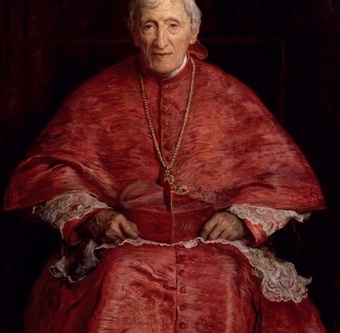 Share: Share on FacebookShare on TwitterShare on Google Plus
The Luminous Mysteries – meditations
We continue our series of meditations, drawn from the works of Blessed John Henry Newman, on the Mysteries of the Rosary. These meditations have been collected together by a Sister of the Benedictine Abbey of St Cecilia on the Isle of Wight.
1. The Baptism of Jesus
When Christ Himself is called a Lamb, this is but his sacred Name, taken from his gracious office; as when St John the Baptist said Behold the Lamb of God, which taketh away the sins of the world (John 1.29), he must be taken to mean, that Our Lord does really and literally take away the world’s sin, though he is called the Lamb by a figure. (SD 14:186-187)
2. The Wedding Feast at Cana
Such seems the connexion between the feast with which Our Lord began, and that with He which he ended his ministry. Nay, may we not add without violence, that in the former feast he had in mind and intended foreshadow the latter? For what was that first miracle by which he manifested his glory in the former, but the strange and awful change of the element of water into wine? And what did He in the latter, but change the Paschal Supper and the typical Lamb into the sacrament of his atoning sacrifice, and the creatures of bread and wine into the verities of his most precious Body and Blood? He Began his ministry with a miracle. He ended it with a greater. (SD:37-38)
3.The Proclamation of the Kingdom and the Call to Conversion.
I am in myself nothing but a sinner, a man of unclean lips and earthly heart. I am not worthy to enter into His presence. I am not worthy of the least of all his mercies. I know he is all-holy yet I come before him.; I place myself under his pure and piercing eyes, which look me through and through and discern every trace and every motion of evil within me. Why do I do so? First of all, for this reason. To whom should I go? What can I do better? Who is there in the whole world that can help me? Who that will care for me, and pity me, or have any kind thought of me, if I cannot obtain it of Him? I know He is of purer eyes than to behold iniquity; but I know again that He is all-merciful and that He so sincerely desires my salvation that He has died for me. (PS v. 54)
4. The Transfiguration
The Transfiguration is of a doctrinal nature, being nothing less than a figurative exposition of a blessed truth, a vision of the glorious Kingdom which he set up on the earth on his coming. He said to his Apostles I tell you of a truth, there be some standing here which shall not taste of death until they see the kingdom of God. (Matt 16.28) Then, after six days, Jesus taketh Peter James AND John his brother, and bringeth them into a high mountain apart, and was transfigured before them (Matt 17.1 etc)… Such is the Kingdom of God; Christ the centre of it, His glory the light of it, the Just made perfect his companions, and the Apostles his witnesses to their brethren. (PS iii,18,265-66).
5. The Institution of the Holy Eucharist
When He ascended into the Mount, His face did shine as the sun, and His raiment was white as the light (Matt. 17.2). Such is the glorious presence which faith sees in the Holy Communion., though everything looks as usual to the natural man. Not gold or precious stones, pearls of great price, or gold of Ophir, are to the eye of faith so radiant as those lowly elements which He, the Highest, is pleased to make the means of conveying to our hearts and bodies His own gracious self. (PS v. :148).

We continue our series of meditations, drawn from the works of Blessed John Henry Newman, on the Mysteries of the Rosary. These meditations have been collected together by a Sister of the Benedictine Abbey of St Cecilia on the Isle of Wight.