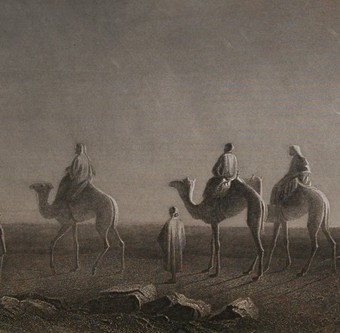 In tribute to Fr Dominic we publish the lecture he gave at a FAITH Symposium.

For the ancient Hebrew, so often under siege from foreign powers and alicted by apostasy from within, the promise of the Messiah was a hope and joy that sustained him throughout his difficult history. The Messiah or “Anointed One” would be his saviour, who would rescue him from the tyranny of his enemies and from his own catastrophic infidelity to the Law of God. The Messiah would be a true Israelite, a noble son of David, the beloved of God.

From about 1900BC, God had called Abraham, the father of the Hebrew people, into a binding and unique relationship with him. He would be their God, and they would be his chosen people. Abraham was to leave behind his native land, his settled and safe lifestyle, his worship of many gods, in favour of a nomadic existence totally dependent upon God. He would be led to the land that God would show him: ”I will make of you a great nation . . .” (Gen. 12:2-3).

But to the magnificent cultures of the Ancient Near East, the Hebrews were an insignificant people. They had neither pyramids like the Egyptians, nor law codes like  the  Chaldeans.  Their  cities  could  not compare with the magnificence of Assyrian Nineveh. Hebrew history was one of survival against the odds. Nor did their religion seem to have fared any better. At a time when to be powerful and influential was to boast a pantheon of gods, into which the gods of conquered enemies were placed during victory parades, Israel had none of this. Indeed, if anything did characterise the Israelite religion, it was horror at such practices.

Alone among all the peoples of the Ancient Near East, Israel worshipped the one God, who alone had made himself known to Abraham . . .This had a sobering effect on her religion, cleansing her writings of mythological and magical aspects in favour of a God who revealed himself to her in human history…

Though it came to us through God’s Chosen People, this unique call to intimacy with God is universal. It is a divine communication with us right from the first moments of our existence as a species. Such a vocation is also unique to the religion of Israel, as the first fruits of her strictly monotheistic tradition. It is the point of continuity between God’s mighty work of creation and the beginnings of his acts in human history. The call of Abraham and God’s subsequent history with Israel is far from arbitrary. It is to be expected as part of that one wisdom of God, seen in his magnificent work of creation, extending into human history.

Men and women stand at the pinnacle of God’s creative purpose, as the most complex fruit of that unity law of control and direction active in the material universe since the dawn of time. And God’s reaching down to the irst human being through the direct creation of the spiritual soul within him, whereby God himself becomes the true environment of man, is also the first merciful act of a loving Father.

There is a qualitative difference between the workings of this one wisdom of God in material creation and in the history of mankind, who is both material and spiritual. Life below man is infinitely nuanced and complex, but it is two-dimensional. It exists and can be explained under God on its own terms.

But man does not it into that mould. The physical environment does not fully explain him. In his body, man is patently part of this physical universe and determined by it.

If its rains, he gets wet. But he is also able to control the physical environment and adapt it to his needs. He puts on an aqualung in the sea or a space suit in the hostile environment outside the earth’s atmosphere. He controls material things and is not wholly controlled by them. As a creature with a nature that requires determination like any other within creation, man looks to live according to his inbuilt law of life. Through the direct creation of the spiritual soul within man, God becomes the environment of man. He becomes the eco-system within which man lives and moves and has his being: as water is to the ish and air to the birds, God is to the soul of man.

And he becomes our God – as personal and vital to us as hand or heart or head.

We are made  for him and  can only come fully alive in his company.  He  does  not  need us, but we need him as life-law and fulfilment. God is sufficient unto himself, transcendent and perfect – but invites us into relationship with him that we might have life and have it to the full. Man is made to respond to God and to bask in his love. God evokes in us a thrill and desire for the good and the true that can only be fulfilled in relationship with God himself.

Revelation in this context means the reaching down of God to human beings directly, evoking within them a response of love and a primitive recognition of God as the source and summit of their being.

The one wisdom of God, which poised all elements and energies of matter in being at the beginning of creation, is equally operative in human history right from the irst awakening of our most primitive ancestor. The call of Abraham has a unique pre- history in the call of Adam. There is continuity, and a line of development in human history analogous to the control and direction of matter leading up to the creation of man.

God and the Word

As God is the Environer of the soul of man, then from the beginning of man there must be, within his personality and within the complex of human society, a God- evoked and God-directed line of spiritual truth, goodness and spiritual authority, with the fullness of development within it.

Therefore the first evocation of the Word of God (i.e. religion) in man as an individual and in human society is a work of God – a work ever developing its own inner coherence.

This noble line of spiritual wisdom finds its fullness in the ardent mono- theism of the Hebrew people. This line of promise is at once sober, truthful and pure. Through contact with the living God, it is very sure of itself and without any magical deviations. Hebrew religion was a faith that knew that men and kings descended not from mythological deities but from the inbreathing of God into the dust of the earth (cf Gen. 2:7). By this participation in the breath or being of God, man becomes not only a living person but also a son of God. In this way a primitive people learnt reverence for human life that was “made in the image of God” (Gen. 1:26).

The line of promise

Weak and insignificant Israel was chosen by God for this work so that, in the silence of littleness, the line of his providence in human history might be conserved more securely. Thus it could be mediated by the prophet and treasured by the poor. As a line of promise in Israel it could be reformed again and again in newness of heart.

Israel was thus vowed to God in poverty, chastity and obedience: in the denial of empire and power, in the purity of her marriage covenant that did not permit her to go after any other religion, and in the fidelity of her worship by an unwavering revealed Faith.

The Covenant in Israel was a call to the vocation of every individual, high and humble alike, and hence a call to the vocation of society in general as well, and to the quality of its works. It was a Tradition embroiled in the life, loves and sins of all people everywhere and was strongly organisational, authoritative and liturgical (meaning that it catered in its acts and life of prayer for the mass of the people to whom it addressed itself). Israel was a religion of the whole people, not of an elite. It cared for the doings of daily life (Mic. 6:8). Like a family with simple loves and noisy arguments, it was obsessed with the waywardness of prodigal sons, and as intent on their repentance (cf Joel 2:12–13).

The Psalms too bear the psychological stamp of man’s abiding divine friendship, and wisdom beyond the ordinary. David’s experience of God knows the anguish of betrayal and despair, but through it all hope and strength prevail (cf Ps. 50: 1ff).

The   Faith   of   Israel   was of a God who cared and intervened in the toils of material daily life: wisdom out of this world that sanctifies the ordinary. It was a Faith that affirmed a message, and an authority that taught first before seeking further understanding. God was other than his creation, but sought the friendship of man as pure gift to his creature (Gen. 2:8; 3:8) Morality proceeded from this divine friendship and from this very life-law built into the nature of man by his Maker.

No development in Hebrew Faith proved more key, more determinative of Jewish character and religious outlook than the promise of the Messiah. The whisper of “one who was to come” from the earliest days of the Covenant grew into a deep chorus of religious fervour in the years building up to the birth of Jesus

Each generation of Israelites grew the vision of the Messiah through the promptings of a newer and nobler vision by God in the heart of priest and prophet, and in the experienced faith and worship of the whole Jewish community. In the end, God’s masterpiece of preparation was the Virgin of Nazareth.

Her child was the Messiah, the desired of all the ages. As the sinless vessel of God’s entire plan for humanity, she gave her soul and her body – her whole humanity and entire self over to God to serve his designs. God needed the womb of a woman in the one, true line of his Chosen People. Her Jewishness was as important as her humanity – it was all part of the one wisdom of God finding its fulfilment in space and time. Yet her work for God in Jesus was a truly catholic work. It would continue on in application to all peoples in every generation throughout the world through the Church, the new Israel. In Mary the Word became flesh (Jn. 1:14), fully human and fully divine. In the words of the elderly Simeon over the Christ child are Jewishness and Catholicity truly and beautifully combined. Past, present and future come together in a hymn inspired by the Prince of Peace:

“At last, all-powerful Master, you give leave to your servant to go in peace, just as you promised; because my eyes have seen the salvation which you have prepared for all the nations to see, a light to enlighten the pagans and the glory of your people Israel” (Lk. 2:29–32).