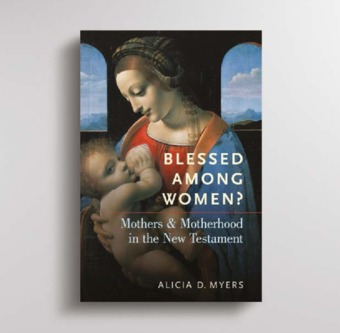 The premise of this book by Alicia Myers is not new. Myers argues that maternal language in Scripture, particularly in the New Testament, the Pastoral Epistles, and non-canonical early Christian literature is not merely imagery or metaphor. Rather, maternal language is both theological and exposes the debates over gender identity for Christ-followers. This premise builds on authors who have already shown that maternal language is theological. What is new is the way in which Myers uses what she calls a ‘gender-critical lens’ aided by her extensive knowledge of ancient medical and philosophical literatures to uncover gender identity debates and to explore how gender constructions inform theology.

According to Myers, gender analysis uncovers an ambivalence towards mothers and motherhood that was common in the ancient Mediterranean world and replicated in the New Testament and early Christian non-canonical literature. However, at the same time Myers argues that the New Testament offers differing paths of discipleship where motherhood is not the only or even desired option as it is in non-Christian ancient literatures.

Myers wants to move away from problematic understandings, for instance that the masculine is the perfect or that salvation is a process of masculinization, or that motherhood is the mark of salvation for women. She challenges the notions, persisting she argues into contemporary western societies, that motherhood represents ideal womanhood as submissive to husbands, and is both a proper ‘choice’ and aspect   of personal fulfilment for women; fatherhood is showing masculinity by controlling women.

Myers investigates Hellenistic and early Roman texts as well as Aristotelian and Hippocratic texts, notably texts related to medicine and biology. Rather than claiming a relationship of dependence between these non-Christian texts and early Chris- tian writings, Myers explains  that  she uses ‘audience criticism’, a method that attempts to locate ancient  expectations  to understand better the New Testament. Myers acknowledges the limitations of her methodology in attempting to recreate the conceptual world of her ancient audience. Nevertheless, she concludes that her analysis repeatedly shows ambivalence toward mothers and motherhood that is grounded in a larger suspicion of woman in the ancient world.

The term ambivalence perhaps characterises the book. While Myers argues that early Christian writings offer different paths to discipleship, and  those  paths  are allegiance to Christ rather than husbands, she maintains that there is still inferiority of all things female. Women remain problematic because they can never be truly masculine. Myers observes that these new paths of discipleship may have emerged from a sense of the imminent return of Christ, but they also suggest the redundancy of biological reproduction and reflect the problematic presence of female believers. Myers  asserts  that  by prioritizing God’s household over all other biological and kinship relationships and eventually reassigning mother activities to the Mother Church, the divine male paterfamilias reinforces female submission. Moreover, by male appropriation of maternal activity, notably through using breast feeding as an imagery for Christian teaching, teaching given by Jesus and male disciples, masculinity may have been reframed but it still perpetuates the equation of perfection and masculinity. On the one hand, Myers claims that early Christian writings reproduce the dominant gendered narrative, yet Jesus presses against this because of his antifamilial sayings, his willingness to suffer for others, and his call to discipleship that is not predicated on simply having children. On the other hand, Myers argues that this still affirms female deficiency.

Although Myers takes a fairly rigorous approach to her non-Christian texts, her chosen methodology does not allow  her to interrogate her scriptural texts, and her treatment of these texts therefore seems simply to act as supports for her presup- positions rather than the result of deeper research. Notably, when Myers explores themes in John’s Gospel she  dismisses  any other interpretation than the one supporting her thesis. So, for instance, John’s account of the conception and birth of Jesus and the dialogue between Jesus and Mary at the wedding at Cana serve only to indicate how Jesus’s biological mother is kept at a distance. There is no reflection on deeper theological interpretations.

Sometimes Myers makes rather tenuous claims to press forward her argument, especially her contention that maternal bodies are theology, yet the literal roles of women are downplayed or appropriated by males. For instance, she admits that John’s Gospel does not use the language that she relies on to make her claims concerning breastfeeding, but in her opinion an implicit interpretation is sufficient; she thinks that Jesus’s instruction to his followers to eat his flesh and drink his blood can be linked to the nourishment given by breastmilk. Moreover, she has a rather limited reading of some scriptural passages, for instance 1 Corinthians 7 and Ephesians 5. Scripture scholars have pointed out that unlike his contemporaries, St. Paul indicates that women are indeed free and equal, because he asks women to submit themselves to their husbands for the sake of family and social order. This is not a question of gender inferiority; rather it is so that the important Gospel message is not highjacked by the equivalent of today’s media focussing on the more scandalous aspects of a story where social order is upturned.

Rather than simply accepting Elizabeth’s proclamation of Mary’s “blessed” state, Myers seeks to ask why and how, hence the title  of her book. Given what she sees as the emphasis among ancient writers on female inferiority that has to be controlled by men through pregnancy and motherhood, Myers makes the point that Mary is blessed because she obeys, not because she is mother, before Mary then disappears from the Gospel narratives. Hence the ambiguity Myers finds in the New Testament: women disciples remain problematic.

However, a significant question to ask is about the nature of Mary’s fiat. Is this just about obedience or is it about love? After all, discipleship, as St. John says, is about love. Certainly, research into gender, imagery and theology is an important project. Neverthe-ess, the difficulty about embedding the Gospels in gender constructions is that the message that Myers wants to get across – that there is ‘a need to be oriented toward life, the source and continuance of which is located in God alone’ – risks becoming lost in the narrative.

By Dr Pia Matthews
Share:Share on FacebookShare on TwitterShare on Google Plus