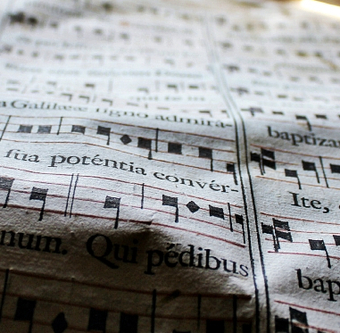 What Does The General Instruction Actually Say About Chant?

“An authentic updating of sacred music can take place only in the lineage of the great tradition of the past, of Gregorian chant and sacred polyphony.”1 The Church has a treasure trove of music, a deep well from which we can draw, yet since the Second Vatican Council that music has for the most part been ignored in most parishes. Perhaps it was a noble attempt to fulfil the council’s request for full and active participation that found us singing hymns at the Mass. After all, hymns were a ready resource for music directors and congregations needed very little training to participate. However noble the intention, this approach took us on an perilous detour leading ever further from our traditions.

The time has come to remove the distraction of a group gathered around a microphone and to rediscover our inheritance, to revive the ancient musical traditions of the Mass, which are inextricably linked to the liturgy. Praiseworthy efforts are being made to improve the music at Mass, and several free publications of the Propers of the Mass are available to download.2

The introduction of the third translation of the Roman Missal came with a revised General Instruction (GIRM), which has restored chant to its rightful place in the liturgy. However, this seems to have met with some resistance. Since its introduction I have read several articles (both online and in print) about the music of the Mass. Many have lauded the long-awaited clarification on music in the liturgy, but many others have argued for a continuation of hymn singing at Mass, favouring the so-called “hymn sandwich”.

Without fail they quote GIRM 47, which concerns the Entrance: “When the people are gathered, and as the Priest enters with the Deacon and ministers, the Entrance Chant begins. Its purpose is to open the celebration, foster the unity of those who have been gathered, introduce their thoughts to the mystery of the liturgical time or festivity, and accompany the procession of the Priest and ministers.”

They then, helpfully, go on to interpret the word chant for us. Interpretations usually go something like this: “Chant is from the Latin cantus, which can also be translated as song.” This may well be the case; however, one then should consider why, if that is what they meant, the translators did not use the word song, or some other form of words showing that a song was permissible, such as chant or song, chant and/or hymn or perhaps liturgical song. The fact remains that the rubrics only mention chant.

In the search for a definitive answer there are several places one might look. First, one might look at the subsequent text of the General Instruction. GIRM 48, which is never quoted, sheds light on why the word chant is used and what it actually means. It reads: “This chant is sung alternately by the choir and the people or similarly by a cantor and the people, or entirely by the people, or by the choir alone. In the dioceses of England Wales the Entrance Chant may be chosen from among the following: the antiphon with its Psalm from the Graduale Romanum or the Graduale Simplex, or another chant that is suited to the sacred action, the day, or the time of year, and whose text has been approved by the Conference of Bishops of England and Wales.” The word chant is used here because it means a chant taken from one of the books of chant. It is not to be mistaken with any other form of song, not even a hymn.

Secondly, GIRM 88 (concerning singing at Communion) states: “When the distribution of Communion is over, if appropriate, the Priest and faithful pray quietly for some time. If desired, a Psalm or other canticle of praise or a hymn may also be sung by the whole congregation.” Note the  se of other words to describe the different types of song permissible – Psalm, canticle or hymn. If the contention is that in the Entrance and at the Offertory3 these songs were also permitted, the question arises: Why were they not mentioned by name in reference to the Entrance and at the Offertory, as they are in GIRM 88 with respect to Communion?

"The Church acknowledges Gregorian chant as being especially suited to the Roman liturgy; therefore it should be given pride of place in liturgical services”

Thirdly, one could compare this paragraph with its former incarnation, GIRM 48 of 2003, in which one will immediately note a fourth option, “a suitable liturgical song similarly approved by the Conference of Bishops or the diocesan Bishop”. This option is missing from the current General Instruction. The question immediately arises: Why was it removed?

If this evidence is not enough one might consider another clue as to why the word chant is used. It is found in the first document to be issued by the Second Vatican Council and is reiterated in GIRM 41: “The Church acknowledges Gregorian chant as being especially suited to the Roman liturgy: therefore, all things being equal, it should be given pride of place in liturgical services.”

We can draw only one conclusion from the above evidence and it is crystal clear: the chant that the Church wishes us to use in the sacred celebration is Gregorian chant. This chant should be given pride of place as it is a part of the rich inheritance of our traditions. We should, therefore, accept that chant is the right and proper music for the celebration of the sacred liturgy.

There may be some who, even after all this evidence, would still argue the case for hymn singing. The arguments might run along the lines that liturgical law is “more about principles than hard and fast rules”. They might even add that, with that in mind, it is better for the congregation to sing something than nothing at all. Let us then investigate the second part of GIRM 48. This qualifies the first half of that particular section, which calls for singing to come from one of the books of chant: “If there is no singing at the Entrance, the antiphon given in the Missal is recited either by the faithful, or by some of them, or by a reader; otherwise, it is recited by the Priest himself, who may even adapt it as an introductory explanation.”

Having already established that the chants are to come from a book of chant it goes on to say that if this chant is not sung the text should be recited. There is no alternative to the Entrance antiphon – it is either sung as prescribed or it is recited. A replacement hymn is not given as an option.

“One needn’t be a trained musician to sing chant. It can be sung unaccompanied, so there is no need to hire an organist. And it can be sung with minimal initial training”

Why, then, is there such resistance to chant, the only form of music mentioned by name in Sacrosanctum Concilium. By continuing to disregard or place arbitrary interpretations on the rubrics or, worse still, to speculate on them to suit our own ends, we ignore what is asked of us in the celebration of the Eucharist. In particular, we risk lowering the dignity of the celebration and breaking that “uninterrupted tradition” which the document goes to great lengths to highlight.

We should therefore ask ourselves three questions:

Are we being asked to do something heretical?

Are we being asked to do something theologically unsound?

Are we being asked to do something illegal?

If the answer to these is negative then we may ask ourselves a fourth question: “Why resist?” Fear of the unknown quite often prevents us from trying something new. In this case we should recall the words spoken to Mary by the angel, “Be not afraid,”4 and again to Joseph, “Do not be afraid,”5 and again by Our Lord, who constantly exhorted Peter and the apostles, especially after the resurrection, to have no fear.

Training may be one common obstacle, but this is not insurmountable and the efforts will be richly rewarded. There may be parishes where not even one person can play an instrument or read music, but this is certainly not a problem when it comes to chant. Chant “democratises” (for want of a better word) the music of the liturgy. One needn’t be a trained musician to sing chant. It can be sung unaccompanied, so there is no need to hire an organist. And it can be sung with minimal initial training, which is not to say that we should not strive to better our efforts through continued instruction.

I am sure that, despite all this, there will be some who will continue to argue for the status quo and who, despite what Mother Church is asking of us through her bishops, will disregard the General Instruction. Undoubtedly, they will be able to come up with very convincing counter-arguments to justify their position. After some reflection on whether this opposition is really about singing or about some other deep-seated issue, we may still all arrive at the same place: that we belong to the Church and that this same Church, with the inspiration of the Holy Spirit, leads us towards God through (among other things) the full and undiluted celebration of the liturgy.

One final note from GIRM 397: “The Roman Rite constitutes a notable and precious part of the liturgical treasure and patrimony of the Catholic Church; its riches are conducive to the good of the universal Church, so that their loss would gravely harm her.”

Joseph Estorninho is the director of music at St James’s Catholic Primary School in Twickenham and the director of the Gregorian chant choir at the parish of St Margaret of Scotland in East Twickenham. He studied composition at the University of Melbourne. Among his compositions is the work “Requiem for the Innocents”, written to commemorate the loss of unborn babies through abortion or miscarriage. He has written several musicals and cantatas for schools.

The Graduale Parvum jointly published by the Church Music Association of America and The Blessed John Henry Newman Institute of Liturgical Music:
media.musicasacra.com/books/parvum.pdf

3The chant for the Offertory is treated in the same way as that of the
Entrance GIRM 74.

By Joseph Estorninho
Share:Share on FacebookShare on TwitterShare on Google Plus