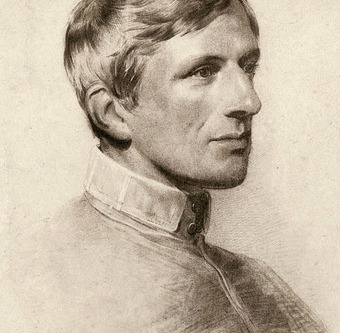 Why Newman matters to us

Share: Share on FacebookShare on TwitterShare on Google Plus
A time to rejoice: John Henry Newman is honoured as a saint. The Church in our country needs an opportunity to celebrate and give thanks…we too often remind ourselves of the problems, challenges, and difficulties that we face, along with reminders that many (most?) of these are self-inflicted. October’s ceremonies and celebrations in Rome for the canonisation are a time to remind ourselves of the many blessings God has sent, and is sending, to the Church in Britain.
We had a glorious Eucharistic Congress in September last year – with that unforgettable Procession of the Blessed Sacrament through the streets of Liverpool, rain-soaked and somehow the more splendid because of that. A nationwide Marian project will culminate in the re-dedication of England to Our Lady next year – and Scotland has already been so dedicated with a great gathering at Carfin. We have seen a steady increase, in recent years, of attendance at devotions which not so long ago were deemed to be vanishing from Catholic life: such as Adoration of the Blessed Sacrament and the Rosary, along with popular new initiatives of which such devotions form a major part including Nightfever, Days with Mary, Catholic Underground and the various large summer gatherings of different groups at Walsingham. These might seem to be small things compared to the larger secularised country in which we live. But God so often works through small things.
Fr Ian Ker, biographer of Newman, interviewed in this issue of FAITH, notes Newman’s prophetic understanding of “Movements” in the Church. Certainly an observable reality in the Church in Britain today are the New Movements: the Charismatics, the Neo- Catechumenate, Focolare, Opus Dei, and, yes, the Faith Movement. One fact about these Movements is that they are composed of the whole faithful – lay people and priests together. This was very much an understanding of the Church that Newman grasped: the model is not first and foremost hierarchical – the Church is, as Lumen Gentium (Vatican II) puts it, essentially “in the nature of a sacrament”. This document speaks of a “messianic people” in whom the Holy Spirit “dwells as in a temple”.
Newman is often misunderstood: he sought to help Christians grasp their calling, the calling that flows from Baptism and Confirmation. This has sometimes been suggested as meaning that we should downplay the specific calling of priests, but this is all wrong: the call is to us all, each in his or her calling, and the New Movements exemplify this. Newman, so often and rightly called the “Father” of the Second Vatican Council, struggled against the over-clerical approach of his day. Misunderstood then, he is still misunderstood by some today. But he has also been faithfully interpreted, notably by Cardinal Joseph Ratzinger, later Pope (now Emeritus) Benedict XVI. Specifically, this great theologian grasped the true nature and significance of the New Movements, championing them at a time when many Bishops were wary and many commentators were confused about them.
Fr Ker notes: “The future Pope Benedict XVI was certain that the new phenomenon in the life of the Church represents the fifth great charismatic movement of the Spirit in the history of the Church, in succession to the monasticism of the third century, the mendicant friars of the thirteenth, the Jesuits and other active orders in the sixteenth and the missionary congregations of the nineteenths. The fact that the ecclesial movements and communities embody the ecclesiology of the first two chapters of Lumen Gentium is not surprising. For charisms are given to the Church by the Holy Spirit in response to the particular historical situation in which the Church finds sherself.” (Ker, Newman on Vatican II, Oxford University Press, 2014 p.105).
Newman, living in what we today might see as a notably religious era – Victorian Britain with its full churches, its networks of Christian organisations of every sort, its overseas missions – could see secularisation on the far horizon. The Church needed a deeper and more sacramental self-understanding, a well informed and educated laity, a confidence in dialogue with a changing world.
Newman is important for us as Catholics in Britain today for a great many reasons. One of these is his understanding of popular Catholicism: people giving voice to their faith. Truth imposes itself because it is true. The faithful – lay and clergy together – have often, in the history of the Church, held fast to the truth against great odds. When, as Catholics in Britain, we walked rejoicing in the rain last September, when we gather rejoicing in Rome this October, we are singing out our love of that Truth which has been handed down to us and gladly affirming that one of our own is being held up for us to honour.
Our bishops need to listen to the authentic voice of the faithful in this: there is a great deal of affection and loyalty among Catholics in Britain, who have a strong sense of a folk memory of persecution by the public authorities (the Tudors, penal laws, and all that), a legitimate pride in the establishment of Catholic schools (up and running, serving the needs of the poor, decades before government legislation on compulsory education in 1870), and in recent decades two hugely successful papal visits.
We will celebrate this canonisation with joy – and we must allow it to boost us, and give us a sense of renewed energy and zeal.
Share:Share on FacebookShare on TwitterShare on Google Plus