Stand-up comedy, books and a newspaper

Stand-up comedy, books and a newspaper

Joanna Bogle talks to Greg Watts
Greg Watts is a Catholic writer whose books include Labourer in the Vineyard, a biography of Pope (now Emeritus) Benedict XVI, the first to be produced following the 2005 papal election. He is currently editor of The Pilgrim, the Southwark diocesan newspaper.
Appointed in 2011, he recalls telling Archbishop Peter Smith that he didn’t want a paper with “photos of people eating sausage rolls in a parish hall” or too many pictures of bishops and priests. “We both agreed that we wanted articles on education, family life, spirituality, Church history and so on.”
Read More

Holloway on… Looking at the problem of evil - Part I

Share: Share on FacebookShare on TwitterShare on Google Plus
Holloway on…
Looking at the problem of evil - Part I
It is said that the only real and intelligent objection to belief in the existence of God, is the problem of evil. Many will be inclined to agree. Certainly any discussion among younger teenagers about the goodness of God and the power of God will eventually drift to the demand “If there is a God, why does He let it all happen?” If, on the plane of moral evil rather than physical or ‘natural’ evil, one replies with the real freedom of the free will and the real power of personal sanctifying grace to sweeten and transform our personalities if we will allow Him, the rejoinder comes, “Well, yes, but if He is almighty why does He not stop me from sinning and going to hell?” One has heard of a certain seminary professor who teaches his students that “God cannot be called almighty because of the problem posed by evil, but unsurpassable, yes, certainly”. I hope the good God feels flattered at being so put at the top of the class, even if not quite in a class of His own. One is not surprised to learn that the same honest man is unsure of any real distinction between matter and spirit, or between God and his creation. It would follow.
Read More

Book Review: The Christian revolution that made our world 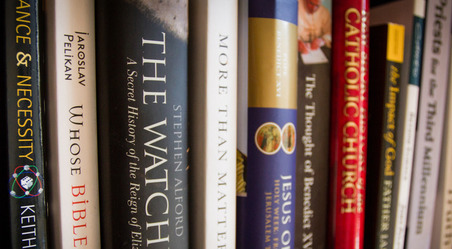 The Christian revolution that made our world
Dominion: The making of the Western Mind by Tom Holland, Little, Brown, 594pp, £25.00
reviewed by Richard Whinder
This is an important book: a work by a bestselling author which attempts an objective overview of the history of Christianity and its influence on the Western world. It represents a considerable achievement, and it deserves to be read. Almost everyone will find something new in these pages, while committed Christians will find their faith affirmed – if occasionally challenged as well.
Read More

Book Review: The cry of a Cardinal’s soul

Share: Share on FacebookShare on TwitterShare on Google Plus
The cry of a Cardinal’s soul
The Day is Now Far Spent by Robert, Cardinal Sarah, Ignatius Press, 349 pp, £16.50
reviewed by Mark Vickers
Coming just three years after his magisterial tome arguing for a rediscovery of the power of silence, one speculates why the Prefect for the Congregation for Divine Worship felt the need to speak out again, offering the Church another substantial volume. It is a question which the Cardinal anticipates, and answers. Christians are disorientated. ‘The Church is experiencing the dark night of the soul.’ Daily the Cardinal finds himself asked for help and advice. It requires courage to analyse and articulate the deep-seated causes of the current spiritual crisis. Courage is not something which Sarah lacks.
Read More

Share: Share on FacebookShare on TwitterShare on Google Plus
Wisdom beyond monastery walls
The Joy of God: Collected Writings of Sister Mary David, Bloomsbury Continuum, 188pp, £12.99, $18.00 USA
reviewed by Sister Mary Dominic Pitts
To understand this remarkable collection of spiritual writings, one must know something of the writer, Benedictine Sister Mary David Totah. Her spirit is that wonderful paradoxical blend of lighthearted fun with deep spiritual insight. She exemplifies the finest response of human nature to Jesus Christ, the author of Truth.
Read More
Download
Read Online
Subscribe